After three years of powerful returns, investors entered 2022 hoping for more of the same. That was not the case. There were several reasons. Inflation, fueled by supply chain disruptions and pent-up demand, continued to surge. Although at least part of the rise in inflation is likely temporary, inflation rose at the highest rate in decades.

The Fed, which had slashed short-term interest rates to near zero in response to the pandemic, took note. It signaled that for the first time since 2018, it was poised to increase interest rates multiple times to help quell inflation.

While investors grappled with these twin threats, another was building. Russia, which had coveted neighboring Ukraine’s prosperity and strategic location on the Black Sea, began amassing troops and weaponry at the Ukrainian border. Then, in late February, Russia mounted a comprehensive invasion. As Russia is a major energy exporter, oil prices spiked. This further complicated the inflation and interest rate picture.

Markets struggled throughout the first few weeks of the quarter but given this triple threat, it was more than some could bear. By early March, the DJIA and the S&P 500 had both entered a “correction,” which is a decline of 10% or greater. The Nasdaq Composite, the darling of 2020 and 2021, had passed into a “bear market,” with a decline of 20% from last year’s highs.

Most importantly, our thoughts are with those impacted by the war. Acknowledging their suffering and pain are vastly more important than markets and money. At least at this point, the people of Ukraine have proven far stronger than the invaders imagined, with many fighting house-to-house to defend their families and homeland. It is hard to imagine such courage, and our thoughts are with them.

There is an old market saying, “markets often do whatever it takes to confound the largest number of people.” That is what happened. Yes, inflation has continued to be stubbornly high. The Fed did raise interest rates in late February, as expected, and the war in Ukraine continues. Since the lows, however, equity markets staged a comeback trimming losses. 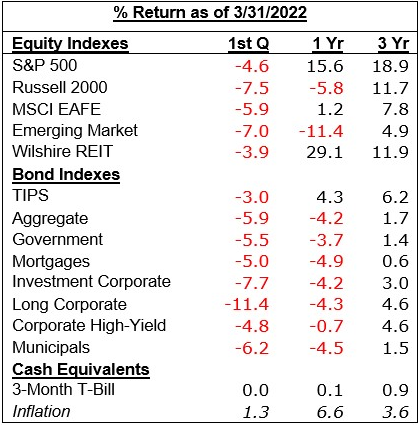 U.S. and International Equities: Given the events of the first quarter, stocks held up reasonably well. You would hardly know it from the financial news. A frontpage headline from the Wall Street Journal on April 1st proclaimed, “Stocks Suffer Worst Quarter in Two Years.” True, but it leaves out that the two years they reference were marked by a largely relentlessly rising market. Some always see the glass as half-empty.

As for U.S. equities, the S&P 500 ended the quarter down 4.6%, the lowest decline among the broader indices. U.S. Mid-caps dropped 7.5%.  International equities didn’t fare as well as the S&P 500. This is likely because of Europe’s closer proximity to the conflict and dependence on energy imports from Russia. The Developed Market Index declined 5.9% for the quarter. Emerging markets also declined, giving back 7%.

Fixed-Income: Like stocks, bond prices benefited greatly from the Fed’s actions during the pandemic. As interest rates fell to near zero, bond prices rose.  Eventually, with a recovering economy, things had to return to a more normal state. As it became more likely that the Fed would be more aggressive to fight inflation, bond prices dropped. Often U.S. bonds, particularly Treasuries, are a safe haven when a dramatic event like the Ukrainian invasion occurs. Even the flight to safety wasn’t enough to overcome the pressure from inflation and rising rates. The Barclays Aggregate, a measure of the broad bond market, fell 5.9% for the quarter.

Back to our half-filled glass, there can be a positive side to rising rates. Given the pandemic and before it, the Great Recession with its unusually long recovery, interest rates have been abnormally low for many years.  For investors, it may be worth the pain of declines in the value of bond portfolios in exchange for more reasonable returns in the years to come.

This isn’t over. It never is.

We are not dismissive of any of the current issues affecting markets and your portfolio. We know they are real challenges, and they are not likely going away soon. When they are resolved, more will come behind them. That is just part of investing. We are realists. Our optimism doesn’t replace discipline, preparation, and resolve. It is strengthened by them.

Thank you for your trust and confidence. We are here if you need anything.

Please help us in welcoming Randy Composanto (pictured below) to the team! Randy joins our team with the goal to enhance the service we provide to our Employer Sponsored Plans. 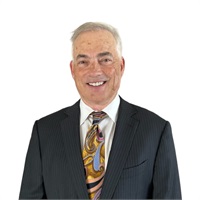 Congratulations Lawrence Smith, CFP®, CRPC®, CRPS® on being recognized as one of the InvestmentNews 2022 Excellence in Diversity, Equity and Inclusion Award Winners! Read more about it here. 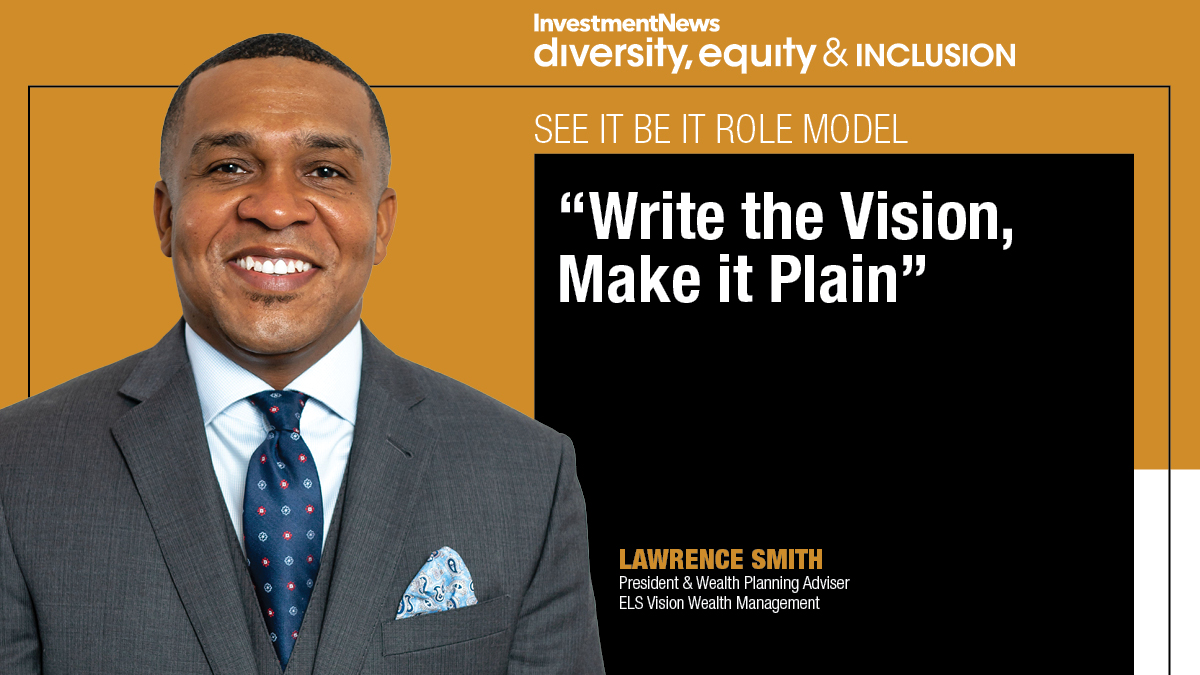 Sources of data- Wall Street Journal, CNBC, FactSet, S&P Global, MSCI, Russell, Bloomberg. The performance of an unmanaged index is not indicative of the performance of any particular investment. It is not possible to invest directly in any index. Past performance is no guarantee of future results. This material represents an assessment of the market environment at a specific point in time and is not intended to be a forecast of future events, or a guarantee of future results. Three-year performance data is annualized. Bonds have fixed principal value and yield if held to maturity and the issuer does not enter into default. Bonds have inflation, credit, and interest rate risk. Treasury Inflation Protected Securities (TIPS) have principal values that grow with inflation if held to maturity. High-yield bonds (lower rated or junk bonds) experience higher volatility and increased credit risk when compared to other fixed-income investments. REITs are subject to real estate risks associated with operating and leasing properties. Additional risks include changes in economic conditions, interest rates, property values, and supply and demand, as well as possible environmental liabilities, zoning issues and natural disasters. Stocks can have fluctuating principal and returns based on changing market conditions. The prices of small company stocks generally are more volatile than those of large company stocks. International investing involves special risks not found in domestic investing, including political and social differences and currency fluctuations due to economic decisions. Investing in emerging markets can be riskier than investing in well-established foreign markets. The MSCI EAFE Index is designed to represent the performance of large and mid-cap securities across 21 developed markets, including countries in Europe, Australasia and the Far East, excluding the U.S. and Canada. The Russell 2500 Index measures the performance of the 2,500 smallest companies (19% of total capitalization) in the Russell 3000 index. The S&P 500 index measures the performance of 500 stocks generally considered representative of the overall market. The Wilshire REIT Index is designed to offer a market-based index that is more reflective of real estate held by pension funds.