After more than a decade of strong returns across most asset classes, rarely interrupted by sustained declines, investments turned rocky in 2022. While in previous years markets did encounter their share of challenges, 2022 brought a new litany of concerns.

Unlike the pandemic and the resulting shutdown, this time, with an overheating economy, the Fed was unable to ride to the rescue. Against this backdrop, declines were both deep and broad. The S&P 500 fell 18% for the year. The NASDAQ 100 index suffered even more with losses over 32%. Other equity indices, from small caps to international, also dropped.

The bond market was also left flat-footed by the sudden reversal. In January 2022, bond markets were predicting the upper limit of the federal funds rate would rise to 1% by the end of the year. Rates instead charged upward and currently stand at 4.5%. Bonds, which often hold up better during challenging times, dropped as the Fed ratcheted up rates, vowing to do whatever it took to tame inflation. The Barclays Aggregate, a measure of the total U.S. bond market, declined with a 13% loss.

With “cheap money” withdrawn, more speculative assets did far worse. Major cryptocurrencies, pumped by a volatile mix of social media, Super Bowl ads and leverage, lost over 60%. Some others went to zero. Many of the “hot” SPAC IPOs and meme stocks fell back to earth, often in dramatic fashion. The CNBC Post-SPAC index sank over 60% in 2022 and is down roughly 80% from 2021 highs.

Amid the declines, there seems to be a pattern. While most investment returns were disappointing, investments with short operating histories and hype were often hit the hardest. 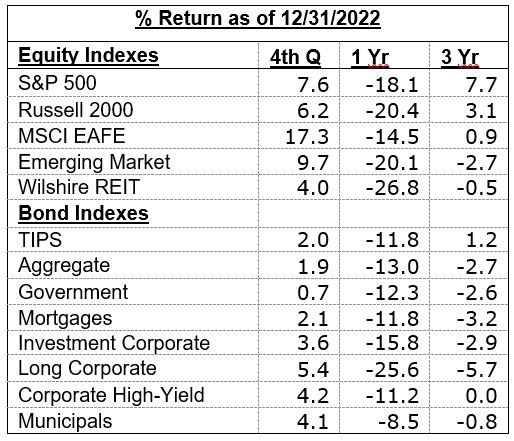 Perspective on a negative year

So, there are at least two ways to interpret the “worst decline since 2008” headline. One is that equities logged the worst annual returns since the Great Recession- so things must be really bad. The second, which we believe is correct, is even considering bad years that come along, stocks, driven by human resilience and ingenuity, have produced solid returns over time.

This concept was also displayed over the tumultuous markets of the last three calendar years. Investors were feeling pretty good at the end of 2019. The S&P 500 ended the year up over 30%. Inflation and interest rates were low. When 2020 rolled around, things went bad quickly. Investors were hit with unwelcome news on multiple fronts.

A pandemic spread throughout the world with tragic human consequences. Productivity and the supply chain buckled. Governments raced to inject massive stimulus to the system. While the stimulus worked, it eventually caused rampant inflation. Russia invaded Ukraine, causing a humanitarian crisis, and threatened to destabilize Europe. The Fed reacted to inflation by implementing giant interest rate hikes, causing bond yields to spike.

Many would be surprised to know that through these challenging events, the S&P 500 produced a 7.7% positive compound annual return over the trailing three-year period. We think this provides important lessons concerning discipline, restraint and proper portfolio construction.

With these dramatic market movements, one would think the “experts” would have seen this coming. In December 2021, the Wall Street Journal reported a survey of leading New York-based investment banks, with three quarters of the respondents predicting a positive return for the S&P in the upcoming year. The most positive forecast was roughly a 7% increase, while the most bearish predicted a small 3% loss. So, with an 18% decline, the closest guess was off by 15 percentage points and the worst was off by 25 percentage points. These predictions were not some kind of uncommon outlier. They have been compiled and published regularly by the Wall Street Journal and others. They generally don’t have a high level of accuracy.

We see several positives emerging among the declines. First, for markets to be healthy, excessive valuations and behaviors need to be periodically wrung out of the system. With the crushing declines in speculative investments and excessive risk-taking behaviors, that has definitely been happening. Secondly, bond yields have been artificially depressed for many years, robbing investors of future cash flow. The declines of bond prices have not been pleasant, but they likely portend higher returns in the future.

Investments have been great vehicles for building wealth over time. Markets are also volatile, unforgiving, and defy short-term predictions. Discipline and mathematics can help find the path. Common sense also helps. The goal is to carefully build risk-aware portfolios that can weather the inevitable declines and build wealth responsibly over time. We call that getting clients “all the way home.” It is at the core of what we do.

Part of our job is to do the math and manage capital. It is also our job to communicate, inform and most importantly, to listen. We’re right here if you need us.

The performance of an unmanaged index is not indicative of the performance of any particular investment. It is not possible to invest directly in any index. Past performance is no guarantee of future results. This material represents an assessment of the market environment at a specific point in time and is not intended to be a forecast of future events, or a guarantee of future results. Three-year performance data is annualized. Bonds have fixed principal value and yield if held to maturity and the issuer does not enter into default. Bonds have inflation, credit, and interest rate risk. Treasury Inflation Protected Securities (TIPS) have principal values that grow with inflation if held to maturity. High-yield bonds (lower rated or junk bonds) experience higher volatility and increased credit risk when compared to other fixed-income investments. REITs are subject to real estate risks associated with operating and leasing properties. Additional risks include changes in economic conditions, interest rates, property values, and supply and demand, as well as possible environmental liabilities, zoning issues and natural disasters. Stocks can have fluctuating principal and returns based on changing market conditions. The prices of small company stocks generally are more volatile than those of large company stocks. International investing involves special risks not found in domestic investing, including political and social differences and currency fluctuations due to economic decisions. Investing in emerging markets can be riskier than investing in well-established foreign markets. The MSCI EAFE Index is designed to represent the performance of large and mid-cap securities across 21 developed markets, including countries in Europe, Australasia and the Far East, excluding the U.S. and Canada. The Russell 2500 Index measures the performance of the 2,500 smallest companies (19% of total capitalization) in the Russell 3000 index. The S&P 500 index measures the performance of 500 stocks generally considered representative of the overall market. The Wilshire REIT Index is designed to offer a market-based index that is more reflective of real estate held by pension funds. CRN-5397078-010523